MEA in the News

Picture a verdant valley cut by sparkling waters running from the highlands of the Oak Ridges Moraine north of Toronto down to Lake Ontario.

Now imagine a golf course by the riverbank owned by a man with a passion for fishing and conservation on his mind. The course is Parkview Golf Club in Markham, Ontario, the river is the Rouge, and the man is Jim Bamford.

With the outlook he had on life and the close relationship he had with the river, it seemed only natural that he would get involved in its well-being. So he enlisted the aid of his friends in The Metro East Anglers to come up with a plan of action. They decided to create a fish hatchery.

In March of 1995, under the guidance of Ontario Ministry of Natural Resources biologist, Mark Heaton, MEA volunteers collected about 5800 eggs and placed these in upwelling incubation 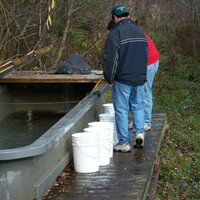 boxes set in Bamford Brook, a small feeder stream to the Rouge River and, by mid June 3500 fry were released into the lower Rouge. A collection in April of 1996 produced 22.5K fry. The club also received Brown Trout and Atlantic Salmon eggs from OMNR and by the spring of 1997, 75K Brown Trout, 25K Atlantic Salmon and 50K Rainbow Trout were released into the Don River, Rouge River, Morningside Creek and Highland Creek.

From those humble beginnings, the hatchery grew and expanded until it comprised two buildings housing banks of Heath tray incubators, indoor early-rearing and growth tanks, and a large outdoor growth tank, all fed with a system of pipes that channelled spring water throughout. Schools and community groups often visited the hatchery to discover what the club was doing to enhance the local fishery; they always left impressed by what a group of dedicated volunteers can do.

In the fall of 2006, an agreement was made between the Ontario Ministry of Natural Resouces, the Ontario Federation of Anglers and Hunters and Metro East Anglers.

The operation was moved from Parkview to the Ringwood Fish Culture Station in Stouffville where volunteers continued their efforts to support the Lake Ontario fishery. The Ringwood facility was slated for closure, but thanks to the MEA volunteers, it remained in operation to continue the Chinook Salmon program. In addition to the Rainbow Trout, Brown Trout and Atlantic Salmon reared at Parkview, the club now assumed the responsibility for producing the entire Ontario quota of Chinook Salmon for Lake Ontario, stocking in excess of 560 thousand Chinook Salmon yearly since 2007.

Additionally, due to the abandonment of Coho Salmon stocking in Lake Ontario, the club proposed and was granted permission to re-instate Coho Salmon production. With the addition of Coho Salmon to the program in 2006, MEA volunteers brought to five the number of species being reared at Ringwood, 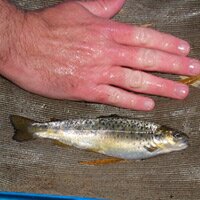 with almost one million fish being stocked yearly into Lake Ontario and its tributaries. The club also operates four pen imprinting sites for Chinook Salmon in the local area.

The agreement expired in September 2012 and, with the move of the Chinook program to the Normandale Fish Culture Station, Ringwood was again slated for closure. Fortunately, OMNR was receptive to the club's proposal to continue operations at the facility with a reduced program. The club now works in partnership with OMNR to produce Rainbow Trout, Brown Trout and Coho Salmon, to allow MEA volunteers to continue to support the Lake Ontario fishery.