MEA in the News

Direct stocking is the traditional method of releasing fish raised in a hatchery: fish are stocked into tributaries, harbours and other areas where there is water access. At times, the locations are determined by ease of access more than for optimal fish release and survival. Water conditions may not be ideal and there may be an abundance of predators 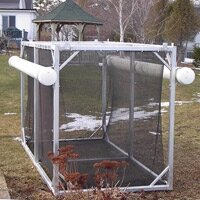 or lack of suitable food, resulting in poor post-stocking survival of the fry. To address these issues, in 1998, a group of concerned stakeholders established a net rearing project in Orleans County, New York. The project was monitored by the New York Department of Environmental Conservation (NYDEC) who determined it to be a success and allowed other cooperative sportsmen’s groups to establish pens on the south shore of Lake Ontario.

In 2003, Al Van Dusen, the then current president of the Central Lake Ontario Sport Anglers (CLOSA) established two pen projects on the north shore of Lake Ontario at Wellington and Barcovan. Metro East Anglers set up pens at Whitby Harbour in 2008, Port Darlington in 2009, and at Oshawa Harbour and Bluffers Park Marina in 2010. The St. Catherines Fish and Game Association launched their project in 2009 and The Port Credit Salmon and Trout Association in 2010.

There are a number of benefits to complete in a pen the raising of hatchery fish. These include minimized predation, aclimitization to the new environment, opportunity for 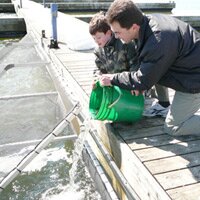 the fry to learn how to feed in the wild, imprinting on the natal water source, increased growth and lower mortality on final release. Additionally, pen projects increase public awareness of the fishery and demonstrates to the local community the dedication and contributions of anglers. The latter has further ramifications in engaging the community for the betterment of the environment and foster a respect for, and stewardship in, the resource.

One of the major benefits of pen rearing is the imprinting of the fry on the location where the pens are located. The fry are held in the pens for at least 21 days so they can complete the smoltification process. By doing so, the fry will have imprinted on the water where the pen is located, such that they will return to the area as adults in 3-4 years. Studies have shown that pen-reared fish returns to the natal grounds are two to six times higher than fish directly stocked in the lake. The Lake Ontario salmon fishery is predominantly a boat-based one, requiring specialized gear and equipment, leaving the shore-bound angler little opportunity to participate. By locating the pens in harbours or other areas where there are piers or other means of shore access, anglers have the opportunity to fish for salmon returning in the fall. Today, in places like Whitby and Wellington, shore anglers are, for the first time ever, catching Chinook Salmon.

Before a net pen can be put into operation, an assessment of the site must be performed. Daily water temperatures and dissolved oxygen readings must be taken for the anticipated penning period 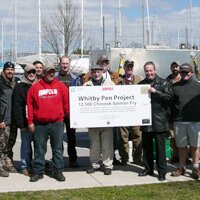 (usually April through mid-May). The site must be sufficiently deep (at least 2m) have a flow of water and, obviously, egress into the main lake. The site must also be secure and safely accessible. Approvals from the city or municipality, if needed, must be obtained and then an application is made to the Ontario Ministry of Natural Resources (OMNR) for the operation of the site.

Daily maintenance and feeding are required, so a team of volunteers needs to be formed to operate the pen. Originally, the fish were hand fed five times per day, but this was changed to automated feeding using belt feeders placed above the pens. These are cleaned and re-filled twice a day. The fry feed not only on the pellets dispensed by the belt feeders, but also on zooplankton, invertebrates, insects 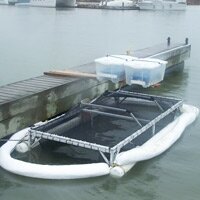 and minnow fry. These additional food sources explain the larger size of the fry compared to their counterparts raised in the hatchery. Similarly, pen fish are more robust, healthier and experience lower mortality than their brethren in the hatchery.

Temperature and dissolved oxygen readings are taken daily to ensure the fish are not stressed and that temperatures are below the 18°C threshold. The fish remain in the pen until smolting occurs at which time they are released into the lake. In general, the pen is towed offshore where it is tipped to release the fish. Ideally, the fish at this point will be between 9 and 10 grams in weight, having grown as much as 2.5 times their weight at placement into the pen.